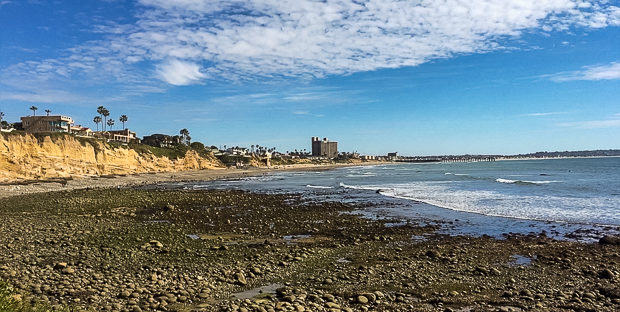 If you’re looking for a low-key weekend activity that will take you outdoors in San Diego without having to spend lots of money, we highly recommend a few hours of adventuring  at La Jolla tidepools. We’ve explored the La Jolla Cove tidepools before – one of our favorite places to visit, and we never get tired of watching the amusing antics of the La Jolla Cove sea lions. How adorable is this baby lounging on a rock? Wouldn’t mind trading places with this little pup right about now.😉 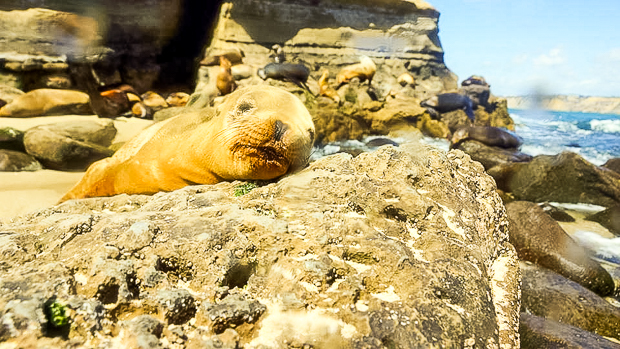 Since we go to La Jolla Cove often, we thought we’d check out someplace new. After checking out Yelp, we headed out to False Point and we were met with this beautiful sight.

I mean, how gorgeous is this??? 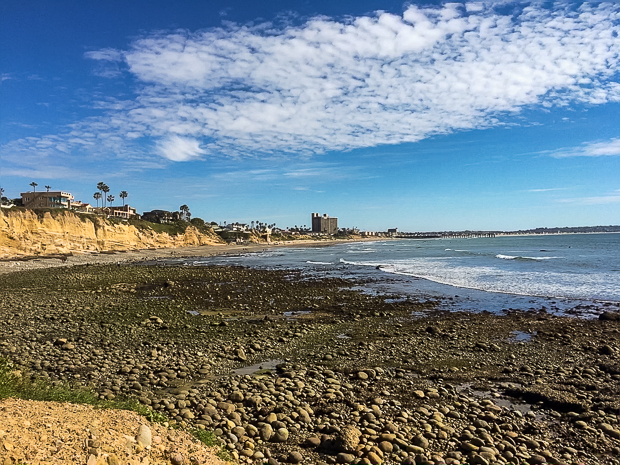 The Birch Aquarium at Scripps offers guided tidepool tours at False Point and we were hoping to catch one of those, but we were last minute in making our reservation and they were already fully booked for the day. Todd and I both work varying schedules, so it’s hard to commit to plans in advance for the weekend. Plus, there’s something about “schedule” and “weekend” that just doesn’t belong in the same sentence (anyone else agree???). Here’s how Todd feels about that…😉 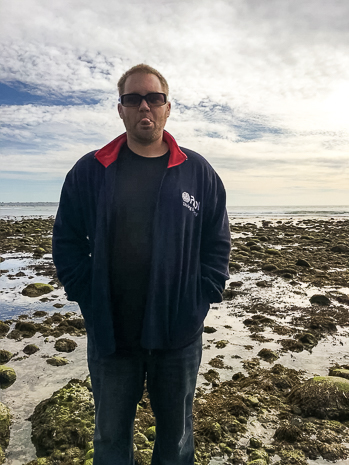 Anyway, when we both ended up free for the day, we decided to DYI our own tidepool tour and it did not disappoint. During low tide, you can see everything from purple sea urchins, giant green sea anemones, and sea slugs…even an octopus, if you’re lucky. A fellow tidepooler discovered this octopus underneath a rock and was nice enough to let us get a look up close and snap a pic. He also happened to be a marine biologist , so he told us all about the marine habitats of tidepools and gave us tips on what to look for. 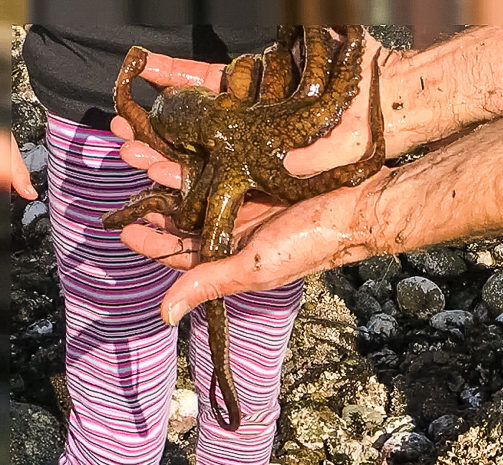 If you want to get a glimpse at San Diego’s sea life up close in a natural environment, we highly recommend checking out the tidepools at False Point. Here are a few tips and details that might help with your tidepooling adventure.

Location
False Point is located at Sea Ridge Drive and Linda Way in La Jolla California (it’s a little over 2 miles and less than 10 minutes from downtown La Jolla). Maps took us on a detour on La Jolla Scenic Drive and, wow, was this one time we were glad Siri led us astray. The view from the top = amazing. Probably one of the best views in San Diego. We were too awestruck to take a picture, but we’ll have to go back and snap some shots for you. Worth the drive just for that view.

Parking
Once you get to False Point, street parking is available (free during certain hours – make sure to check signs before you park). It can be limited, so we recommend going during off-peak hours. Weekdays are usually always a good time explore San Diego without the crowds. We lucked out and happened to score a spot on the weekend.

What We Liked
One of the things we really liked about False Point La Jolla is that it’s easy access – once we found a parking spot, it was just a quick jaunt down a set of stairs and we’d arrived. No Billy Goat tendencies or rock climbing skills required for this adventure. There’s also a bench at the top of the stairs in case you go with anyone who isn’t up to adventuring, or just wants to relax and enjoy the view. There are also TONS of tidepools to explore. Even if there are a lot of people, there’s plenty of room for everyone to have their own personal, private tidepool adventure during low tide. On a sidenote, we were excited to see that dogs are also allowed here during certain hours (again, make sure to check signs). 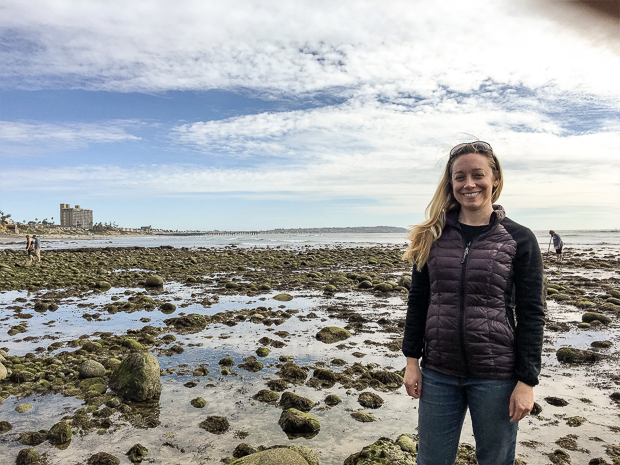 We both love marine life (Todd is an avid scuba diver and underwater photographer) and we really enjoyed this adventure. It’s someplace we’d definitely visit again. We’d love to do one of the guided tours with the Birch Aquarium sometime to learn more about all the sea creatures from the aquarium’s trained naturalists.

Until then, we’re all for exploring on our own when we get the chance, and we hope you do too – you never know what you might uncover.

Have you been tidepooling in San Diego? What are your favorite spots?

This post may contain affiliate links. Sandiegothotspots.com is a participant in the Amazon Services LLC Associates Program, an affiliate advertising program designed to provide a means for sites to earn advertising fees by advertising and linking to Amazon.com. We only share products and services that we think will be helpful to our readers. 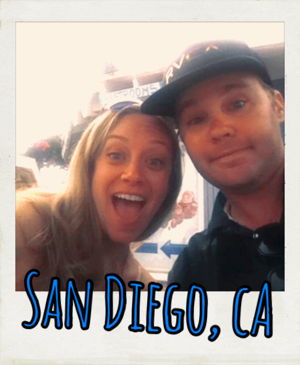